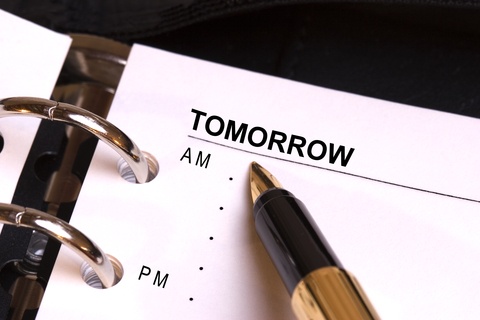 There’s a lot of clichés surrounding the concept of tomorrow. It’s the only day of the week that doesn’t end in “day”. “It’s always a day away”. You know them all. But there’s one that seems to be more accurate than the rest. Tomorrow is the day that never really comes. By the time you get there, it’s today all over again.  Think about every time you say “I’ll do it tomorrow”. I do it all the time. I’ll clean out that scary closet tomorrow, or, I’ll prep all my meals for the week tomorrow. What I really mean is that I don’t want to do it today, and those things are never really going to happen. Or, if they do, it’s going to be a far cry from a 24 hour delay.

Tomorrow isn’t a time, it’s an attitude. We put things off that we don’t want to deal with today, or don’t think we have time to deal with today. It’s avoidance, plain and simple, in all but the rarest of cases.

While it may not be detrimental when you’re just talking about a project around the house, the attitude of “tomorrow” isn’t something that any business can really afford. So if you’ve been putting off a project or a decision, like updating your pharmacy point-of-sale system or adding a new service in your pharmacy, set aside the time to do it and stick to it. Putting it off may mean that you don’t have to make a difficult decision, but then nothing changes or improves.

It’s okay to say “tomorrow” as long as that’s a day of the week that really exists.